Part 3 - Down with the Sickness 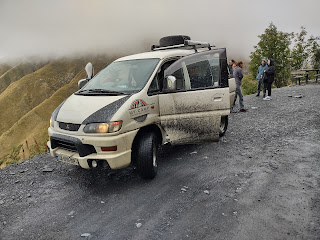 Tusheti and Beyond After our bout with whatever fun parasite decided to ride along with us, we thought it would be a good idea to get out of the city.  Initially we had wanted to get to a place in the north of the country that is very famous called Stepantsminda, but an opportunity presented itself that we did not expect.  In the very north-east of the country there is a region called Tusheti.  The only road into the region is usually closed starting in Sep-Oct and doesn't open again until May-June.  It just so happened, with it being a relatively mild fall, that the road was still open and there was an organized tour making a late season trip.  We quickly jumped on that, not thinking about the how.   The How...   Our trusty steed Tusheti is a protected area in the very northeast of Georgia, only accessible by one road built in the 70s.  The road winds through a gorge and over a narrow mountain pass at a height just under 3000m over a distance of 70km.  With the condition of the ro
1 comment
Read more 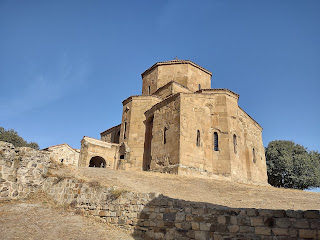 Overcoming! It seems that we have finally triumphed over whatever microscopic being was making our lives a living hell and with that it meant that we needed to get out of Tbilisi as soon as possible.  It's not that we don't like it in the city, but we felt that we had done such a poor job of exploring so far.  So, we hired a driver for the day to take us on an extremely popular route as an introduction to the country.     Itinerary  1. Jvari Monastery - where Georgians believe that Saint Nino erected a wooden cross (Georgian word for cross is Jvari) on the site of a Pagan temple.  The cross was able to perform miracles and therefore became a pilgrimage site.  When the small church became inadequate as a pilgrimage site, the current church was built around the original from 590 to 605AD.  Saint Nino is also responsible for converting her husband, the king, to Christianity; her husband is then responsible for making Georgia a Christian nation.  2. City of Mtskheta - The old Geor
2 comments
Read more
More posts